DML: Let’s start with the obvious: CATL – What does that stand for (and how do i pronounce it?
CATL: Well, unfortunately, it’s not a very exciting story! Jamie just made it up, it doesn’t really mean anything. He used to record under the name „CATL“ in punk bands before we were CATL the band that we are today. the name just kind of stuck. He’s CATL the man. And we are CATL the band. Sort of confusing, right?
Our fans like to make up things it could stand for and we’ve heard some really hilarious ones so if you have any ideas we’d love to hear them! If you google CATL you may come across the „California Association of Texas Longhorns“ which is pretty funny. And you pronounce it „cattle“ like the animal.

DML: You two are a real life couple as well, right? Did that change your band life?
CATL: You are correct! We are wed in the unholy church of rock n‘ roll! We were a band first, and then we became a couple. It’s been an interesting road and not without it’s challenges, but we love being able to work together all the time.
It’s made touring a lot easier because we fit into a car instead of a van, it’s only one hotel room, there’s less people to feed and we don’t have to worry about schedules conflicting with other member. I say „hey Jamie, wanna go on tour?“ and he says „yes!“ and that’s pretty much the decision making process.

DML: Not long ago the band was a trio. How did losing a band member influence the making of your current album and your general sound now?
CATL: Losing and gaining band members has definitely influenced our sound. When we lost the original drummer (Johnny Larue) we picked up Andrew Moszynski who used to play with another Toronto band called The Deadly Snakes. Andrew was a great musician and a really heavy drummer. 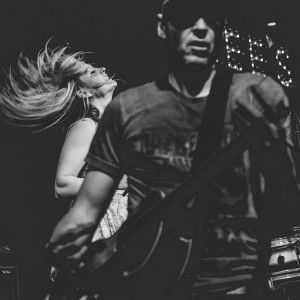 His playing made both of us kick up the intensity of our live performance. When Andrew left (he was in a lot of other bands and couldn’t keep up with our schedule) we had to make a decision to keep going and hire a new drummer or… stop altogether.
Jamie suggested instead that I (Sarah) learn to play the drums and  it’s been the best thing that’s ever happened to me. Without Andrew deciding the leave the band that never would have happened.
The latest record, This Shakin‘ House, is the first full record where I play drums on all the songs and was the most collaborative effort. Because we were living together, we could just work on the songs any time we wanted to.

DML: You are coming to Europe/Germany for your first time now. What are you most curious about/looking forward to?
CATL: Natural boobs and uncircumcised penises. (Jamie’s answer – of course)
This will be my first time to Europe and we’re doing most of the tour by train so I’m really looking forward to that. Boobs and penises are great too. (Sarah’s answer )

DML: What was the weirdest and/or funniest moment in your band life, especially on the road? (Or the most memorable moment in your band life?)
CATL: Life on the road is weird. Period. It would be hard to pick just one weird moment because you come across so many. Mostly it’s the little interactions day to day with people you wouldn’t otherwise come into contact with or have a conversation with. 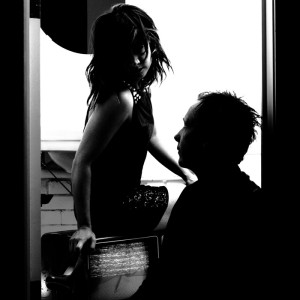 We just had a really memorable experience down in Holly Springs, Mississippi where we got to perform at a real Juke Joint club called Junior’s Juke Joint #2. It belonged to one of our blues heroes Junior Kimbrough. He’s passed away, but the place was filled with Kimbrough children, and the children of blues great R.L. Burnside who are all adults and have their own musical careers. It was a really intimidating place to play but they loved us. It was a really rewarding moment for both of us. One of the Burnsides sold us pot.

DML: If you were to do your own festival evening, what would be the three bands to play that event alongside your band?
CATL: We’re fortunate enough to have played with all of them, but if we could put them all on one bill it would be:
Bloodshot Bill (Can’t Dance Alone – Video)
The Sonics (Cinderella – Video)
Andre Williams (That’s all i need – Video)

DML: Do you know any german bands or even have favorites?
CATL: The Monks.  A bit of Germany / a dash of America (Complication – Video)

DML: Whiskey or Vodka?
CATL: We run with the ‚brown‘ liquor people.

DML: Thanks for the interview!